The Most Important Characteristics of Effective Managers 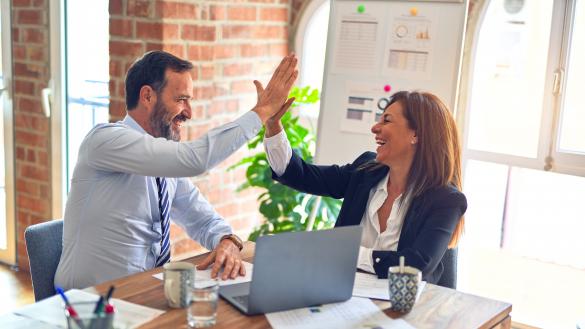 A lot has been said over the years about management styles. Some of it is true, but much of it is also misleading.

For instance, it’s true that everyone has a preferred management style, however, it’s not true that you can’t change it. We all do some things naturally, though if we want to expand our skill set, then we can learn to do things in a way that supports the style that you’d like to have - the style that will make you more effective.

Of course, you have to want to change, and that may be the rub. It’s easier to blame “who I am” than it is to do “what it takes” to be effective.

In this article, we’re going to touch briefly on the spectrum of management styles, discuss how to modify them to fit your needs today, and think about the most important characteristic of effective managers.

Perhaps you expected that the next thing to discuss would be the spectrum of management styles, but to do that would mean to overlook the reason why you’d choose one over the other.

The purpose of management is to produce particular results, and until you know what they are, the style that you adopt is almost irrelevant.

The question then is, what do you want? What do you want your employees to do? And how do you think your management style will give you those results? If you don’t know the answers to these questions, then it would be worth thinking about them first.

For instance, do you want your employees to check their brains at the door and only do what you tell them to? There are managers who are like this. Or maybe you expect them instead to show initiative, to think and behave like entrepreneurs. Maybe you want to have it both ways - a sort of hybrid that somehow intuitively knows when you want them to be one extreme in this situation, but the opposite in that one.

Of course, such an expectation is unrealistic. You either get people who only do what they’re told, or you get those who automatically think for themselves. You have to decide what you want.

Recent thinking has suggested that you should manage the results; not the process. In other words, you should be pretty much unconcerned about how people get the results that you want as long as they don’t do anything illegal, immoral, or against company policy. This approach flies in the face of those managers who want to control everything. But that goes back to the type of employee you want. If all you want is for people to do what you say, then you should hire people who are content with that. Just remember that higher education to one extent or another teaches people to think, and so if you don’t want them to, then you shouldn’t employ those who do. In other words, don’t shortlist people whose approach to work is different from yours.

In the 1960s, one psychologist divided management styles into two categories, much like the ones summarized above. One style, he surmised, was evidenced by managers who believed that most people didn’t like their jobs, were lazy, unmotivated, and wanted to be told what to do; that they needed consistent use of a “carrot and stick” approach to accomplish anything, had no goals, and didn’t want to grow. Admittedly, that’s a rather bleak assumption, though you can see right away how such a belief would lead to a particular supervisory approach.

The polar opposite of the other style assumes that employees are willing to accept challenging work, prefer to make their own decisions, and like what they do.

The problems that arise from these two viewpoints seems to be that it’s not as cut-and-dried as managers or psychologists would like it to be. Research has shown year-on-year that there is great dissatisfaction among employees today. They’re not unhappy because they’re lazy or prefer to be told what to do. Far from it. The reason they’re discontented is that the work isn’t challenging enough in most cases.

As was mentioned earlier, employers have insisted on a higher education degree in order to weed out those they deemed less qualified, but have failed for the most part to make the jobs those people are hired to do commensurately more challenging. In other words, the workforce as a whole is overqualified for the jobs they’ve been given to do. The only people who truly lack goals and want to be told what to do are those who haven’t pursued anything except a minimum education. To look at it another way, studying for any degree or a qualification requires motivation, the desire to set goals, and something of a disciplined work ethic - the opposite of what managers want in employees they expect to simply order around.

This may be one reason why those who work in jobs that require a lot of skill and education also seem to be the most happy in what they do. They feel that they’re growing; that they have to dig deep within themselves to excel. And so managers need to design jobs that meet the needs of their employees.

One of the challenges that managers face is that workers who don’t have higher education qualifications, for example, also lack skills in areas that are essential to the job. For example, while the ability to think deeply may not be a requirement, other skills such as being able to communicate effectively and use good judgement are. And so in order to get good communicators, they also have to hire people who are overqualified for much of the rest of their jobs. This is why so many of them are bored at work. At best, only part of their job is the least bit challenging. The rest of it is mind-numbingly dull.

The first style, or perhaps managerial attitude, described is consists of a kind of circular reasoning. It goes like this: Because people would rather be doing something else, you have to threaten them to get them to do their work. Threats, in the short term, are known to motivate people. Indeed, it was General George Patton who said he wanted his troops to be more afraid of him than they were of the enemy.

There’s a time and a place for threats like that. In Patton’s case, he was part of a much bigger effort to defeat the Nazis. No manager today faces such high stakes.

Managers who are convinced that in order to continue to motivate the unmotivated, they have to reward them when they do the work that’s expected. Once their motivation starts to wane, then out comes the big stick again. Managers who think like this misunderstand employee questions and suggestions as insubordination.

Some managers of this persuasion believe that money is the most effective reward, though we know that this isn’t the case. In most cases, when bonuses or so-called incentive payments are made, recipients believe that they deserve it. In other words, they don’t see it as something that is there to push them onwards. Instead, they see it as something that they were entitled to in the first place. That means that managers aren’t getting what they think they’re getting from it, and it explains why they’re surprised when people aren’t motivated as a result.

When managers assume people have no goals and don’t want to grow, then that also means that they believe that those same employees want to maintain a sort of vocational homeostasis. They want it to be business as usual, with no deviation. The upshot, of course, is that people like this are akin to robots waiting for the power to be switched on. Is that what you want?

There’s such a thing as a self-fulfilling prophecy. When you treat people as if they have no goals, then in an effort to please you, many will act that way . . . for awhile. Once they get a glimpse of how things could be, however, they will throw off the limitations that you have placed on them. Most notably, they’ll work for someone who believes that they can improve themselves; who will give them room to grow, to take on more responsibility, and who will pay them accordingly.

What is the most important characteristic of effective managers?

You’ve probably guessed already that the most important characteristic of effective managers is flexibility. What that means is that one style will not fit all circumstances. You have to learn to adapt your actions to the situation, rather than assume that your preferred style will work regardless.

It should be evident to you that most people aren’t inherently lazy. They do care about their work, and they want to do a good job. The problem is that they’re capable of so much more than you’re prepared to give them. To look at this another way, the complexity of the job that you’ve given them is a direct reflection of your beliefs concerning their ability to do it. If you don’t think that they’re at that level yet or, more importantly, will never be there, then you won’t design a job that will make them stretch. Instead, you’ll leave things exactly as they are.

You can see that there’s much more to management than simply relying on your preferred management style. You have to be flexible enough to draw on a wide range of styles so that you can get the results that you want.

Employees today want a lot of freedom to do the work on their own terms. Recent events have proved this. The carrot-and-stick approach won’t work. If anything, it will drive people away, and given the shortage of skilled labour, you can ill-afford to lose them.

Update and refresh your skills with expert-led free monthly webinars. Invest 60 minutes each month to sharpen your skills, increase your options and improve your chances of making the most of your opportunities. All from the convenience of your office or your home and at no cost.